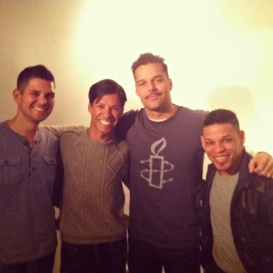 With less than a week to go until his last performance as Ché in the current Broadway revival of «Evita», Ricky Martin welcomed some very special guests backstage at the Marquis Theater on Friday night.

In a photo tweeted after the performance Ricky has his arms around Steven A. Toledo and Pedro Julio Serrano on his right and boxer Orlando «El Fenómeno» Cruz on his left.

Ricky, of course, remains the top Latino celebrity to ever come out after declaring himself a «proud homosexual man» in 2010 while Orlando recently sent shock-waves through the boxing world after coming out in October of last year.  It made him the first professional boxer to ever come out while still competing in the sport and has deservedly earned him the cover of this month’s The Advocate.

The two men also happen to be from Puerto Rico which brings us to long-time Puerto Rican LGBT-rights advocate Pedro Julio Serrano.

Months before Ricky came out, he surprised many when he released a statement in solidarity of a series of demonstrations asking the Puerto Rican government for justice in the brutal killing of a young gay man named Jorge Steven Lopez Mercado. The crime shook the island and I also believe it was also a catalyst for Ricky’s decision to come out. And, indeed, one of the first things he did after telling the world he was gay was to reach out to one of the leaders behind the demonstrations: Pedro Julio.

The two have become friends and have met a few times since then. Ricky has also often used his powerful social media presence to support actions begun by Pedro Julio as well as defend him when Pedro Julio has come under attack from homophobic elements in the island.

Similarly, months before he announced he was gay, Orlando reached out to Pedro Julio for guidance on the possible reactions and repercussions of taking such a step.  In interview after interview Orlando has shown himself to be a thoughtful, extraordinary and exemplary gay role model. Just as if he had been out all his life.  And he often takes time to say he owes a great deal to Pedro Julio and the advice he provided.

For those of us who know, love and admire Pedro Julio and his soon-to-be husband Steven, we know that the admiration that Ricky and Orlando have expressed towards him is well-deserved.

It’s a testament to Pedro Julio’s work and the unexpected hearts he has touched during his lifetime and that’s the reason I love this photo so much.